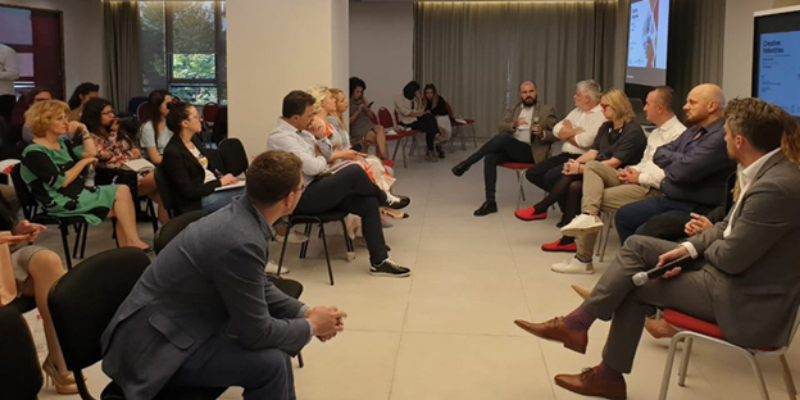 NEST LP participated a 2-day Conference on Creative Industries to discuss and gain insight on the challanges and success of start-ups, empowered by innovation, and creative business incubators.

On 23 October 2019 the Ministry of Finance and Economy (MFE), Lead Partner of the NEST project, represented by Ms Iris Tela, the Project Manager, participated in the first day of the Conference on Creative Industries including advertising, architecture, arts, fashion, design, IT and media, to be considered as the hidden jewels of an innovative community. The activity was held at the premises of M&M Ivanaj Foundation in Tirana.

The event was hosted by: ICTSlab – An Albanian Innovation Lab Center with focus on professional education of the young generation to prepare them for the challenges of the 21st century; SOVVA - a non-governmental civic association in Bratislava, Slovakia, dedicated in supporting the fight against terrorism; CIVITTA - a leading independent management consultancy in the Emerging Europe in Tartu, Estonia; Universiteti Polis – The International School of Architecture and Urban Development Policies in Tirana, Albania and The Ivanaj Foundations of New York and Tirana, in Tirana.

During the first day Slovak and Albanian experts from the field of creative industry and start-ups, along with the Albanian central and local government representatives made exclusive presentations, followed by discussions and consultations, designed to help the Creative Industries sector in Albania. The opening remarks were made by:

The main subjects presented by the Albanian and Slovak interlocutors were focused on the creating successful companies in creative industries, creating innovative marketplace for crafts, forming unifying representative organizations, communicating and marketing a business’s unique value proposition, creating creative incubators, fostering the development of startups and innovation through policy-making. Likewise, topics about enabling cities to become living labs for creative innovators, enabling entrepreneurs to succeed by bringing architecture and entrepreneurship, or techies and creatives together, and educating students to be entrepreneurial aroused the audience’s interest.  The latter topic was discussed by a panel composed of: Stefan Klein, Ledian Bregasi, Dana Kleinert, Kushtrim Shala, Dritan Mezini, Mustali Arjodita and moderated by Daniel Straka.

During the discussions part of the first day of the event, The Lead Partner, MFE, presented and discussed with the above mentioned experts and academics the objectives and main outputs of the NEST project, what has been designed and realized so far to understand the needs and potentialities of local contexts, and how to better implement the project in terms of boosting innovation and creativity of the local small and medium tourism enterprises by means of virtual labs and capacity building in today’s environment. While the aim of such participation was to understand policies, strategies, as well as the involvement of private actors, since one of the main conclusions was that although challenging, the private-public partnership / cooperation has played an important role in many start-up success stories, such a possibility could be considered during the implementation of WP T3 of the NEST project.

During the second day, on 09:15-09:45, at the ICTs Labs premises in Tirana, MFE had a 1V1 meeting with Stefan Klein, inventor and founder of Aeromobil and AirCar, Slovakia, to discuss with and get his further insight on the challenges, difficulties and suggestions on creating a successful company in the area of creative industries. Additionally, disscussions evolved around how these insights could be best conveyed for the strengthening of local tourism companies, backed by connectivity/transport infrastructure with the aim of improving their touristic offer attractiveness through creativity, uniqueness and ICT based services.

From 10:30 – 12:00 MFE participated in the “Workshop setting up a creative incubator”, hosted by Universiteti Polis. Following the discussions, after a brief presentation of the NEST project objectives and main outputs, ideas and suggestions regarding the creation of the virtual joint experiential laboratory and the possibility of combining it with a physical one as yielding the best results for the NEST project were discussed with the panelists, who were representatives of five universities, (among which Polis and UAMD), EU for Innovation Project and the Slovak SOVVA and CIVITTA.